A downloadable game for Windows

This place was built to fulfill your any desire (at least the visual ones).

This game requires an internet connection to run properly. You might still roam the empty halls of the gallery otherwise but there will be no pieces of art to contemplate.

Sometimes you might end up locked in a finite space with nowhere else to go (it's very rare but it happens). In that case press F5 to reload the game.

What this game is doing is technically against Google's and YouTube's (and possibly many other websites) TOS. I'm definitely biting a bullet by publishing this. I doubt they will go after anyone who's playing this but I just want you to be aware of the facts.

Things that appear in the gallery are also not filtered. Anything can come up!

So TLDR: Play at your own risk!

This concept has so much promise, and so much more room to improve. It makes me sad that this game is no longer receiving updates.

The sound changes while moving and listening to a video are pretty fun to mess around with!

I know that's not what this program is about, but I really would like to see pictures as clear as they can be.

It really takes away from the enjoyment when everything is grainy and blurry.

Hey, thank you for the suggestion! Originally the pixelated images were a result of me not being able to filter out the full image links. But later I realized I could do that as well so then I just kept the pixelated look to fit with the PS1 style. I might add a full image view in a future update though, need to fix a few bugs anyway.

Cool, I'll keep an eye out for it!

here from the garfield merch video

Typed "Cabbage", got pics about depression 👍

are there any kinds of keyboard shortcuts in this game?

eg:pause restart relaod turn off music
and most importantly a change sensitivity option like oh god its so low

It's Saying Its Failed Every time I Try To Download It And If It Does Download It Instantly Delete's It Self. Please Fix This. (edit) It Works Now, Thanks

The game isn't unplayable. The 8-bit colour and the pixel art is part of his graphics style and personally I think its a okay touch.

Can you fix the bugs

come'on u should've known that

Love it, the only problem I found was falling through the ground sometimes and having to restart and the world generation overlapping itself. Please come back to this project. It is so fun to explore

I love this!! My only complaint is that once you go into another exhibition whatever you typed in first gets thrown out the window. (Example: I wanted to look at ferrets, and an exhibition called "white" appeared. I thought this referred to white ferrets so i went in, but instead of white ferrets I got plain white canvases)

Can you move the image collecting logic into a DLL that can be replaced?  Maybe even make it pick up any such DLLs from a plugin folder?  It might be worth allowing people to swap out the logic for a proper Google API call with their private API key or for interfacing with other websites.

I have not worked with Unity but I know how to create such a plugin system in dotnet C#.  I figure the interface would be a simple factory function to create a result set object implementing IDisposable with the given search query, a set of functions for getting different data, and the inherent Dispose function of an IDisposable for cleanup.

can you disable the pixelated look?

having the same problem

i got a baby yoda santa tutorial this game is awesome

That's a great experience! I wrote a review about your project: https://medium.com/super-jump/conjure-the-museum-of-your-dreams-in-the-anything-...

the videos don't work for me, I press resume or watch and it just stays a black screen, any idea how to fix that?

But I can't make it work. Like lemonbreasts27 said earlier all of my painting are empty or have wood textures. Even when I start the game in compatibility mode with Windows 8 (or older) it doesn't work. I have an internet connection.

Maybe it is the google/youtube TOS that is wrong

Is the framerate supposed to be locked? When I play in windowed mode, it's 60fps, but when I play in fullscreen, it's quite choppy. I've had this problem with other Unity games, I just wanna know if the low framerate is an aesthetic choice (to match the PS1-style graphics)

Is there a way I can use this to make my own gallery? Like, put in my own pictures and add a placard for information to it?

Please let us window the game or at least control volume settings!

This is really something, it's very surreal looking at an entire gallery of some random internet celebrity that came to mind at the podium. Great work!

nevermind it worked but only after I put it in compatibility mode for windows 8.

Does anyone know what this 3D rendering technique is known as - I'm in love with the 3D art style being used here!

I have played 20 minutes and this is in the running for my GOTY. Incredible idea, well executed.

This is a mesmerizing experience. It's awesome and surprising ! Great job !

This is such a great little idea. Needs a gift shop though, with procedurally generated items. All the best museums have gift shops.

I really like this! The first search term I put in was "Monet" and it really felt like visiting an art gallery. I feel a little less cooped up indoors already.

Later, the game showed its silly side, with clipping geometry and bizarre topics (I'm still not sure how it got onto "Minecraft"). It's very clever, well done.

Game seems to softlock when I interact with the podium at the beginning (where you type what you would like to see). I am unable to type anything and I get the windows loading circle for my cursor.

Really really cool concept though, looking forward to trying it out if I can get it to work.

Hm I've just noticed that myself. It's a pretty strange bug. It doesn't actually softlock, you have to click on the text box first. The loading icon seems to appear when ever you interact with something, be it the request pedestal, any image or info pedestal.

Gonna look into it, thanks for letting me know!

Got the same problem under Linux: I click "interact" on the podium, and I do not know what to do. From your answer I have learned that I had to click the text box (which is tricky since I do not see the mouse cursor). Nice work!

This is super cool, but sadly I wasn't able to try it! the game just crashes upon startup for some reason, any tips on how I could get it to work?

Hello! Is it okay if I ask whether you are working on fixing the sound issues in the Silent House or not?

my favourite part of the gallery was when i fell straight through the floor, very post modern

This game is amazing! Turns out, this makes for a good game to stream with Twitter artist friends, we had a riot last night.

Do you have any plans to update the game? Not necessarily just for bug fixes, but for new features (i.e. no random changes, volume control, silence when playing videos, even images from a folder, that kinda stuff)?

I like this, it is pretty good. I did not find very much glitchs for a game like this. Allthough the walk speed is too slow if you ask me. 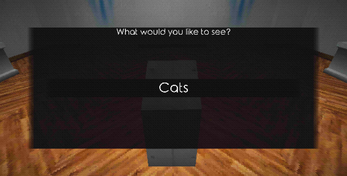 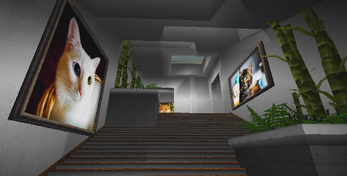 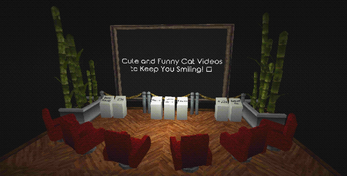 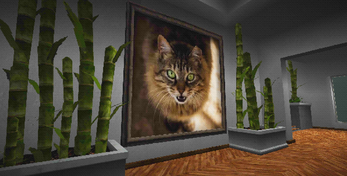